Friday was a very full half day of keynotes speakers. The first was about programme evaluations, and how important it is to think about how to evaluate when designing a training programme.

The second speaker -Jonah Lehrer, a thought provoking writer – introduced what behavioural economics is about. Through many examples, he explained latest dicoveries by scientists studying people’s brains especially when they take decisions: whether it is about to decide what food to choose or how to invest. Neuroscientists’ studies show human beings’ brain is far from being rational: we use other areas from our brains- especially emotions- to take decisions. They have studied for instance how financial bubbles form- and how euphoria and over-confidence make them grow and grow. Other factors like gender and social pressure (especially among men’s groups) also impact how we decide. The big issue is that Western economic theories have assumed for centuries that man is rational- and this is definitely a wrong assumption!
What was especially interesting as well was when Lehrer reported a research done by a Wisconsin Professor who studied Buddhist monks. Their brains “look” different and probably because of the daily hours they spent meditating, they could control their emotions much better than other people (the Professor tested how their brain reacted to the noise of a tire exploding- they didn’t feel any fear while all the other test group of “ordinary” people did even though both groups had been warned in advance). Lehrer’s conclusion was that in order to take better decisions, we should not necessarily be more rational- emotions are important players in our decisions- but think more about how we think – in other words, meditation and knowing ourselves help us take more control of our lives.

The next discussion was led by Prof. Dilip Soman and gave rise to a lively debate: the topic was nudging or educating consumers on financial issues. So, should public authorities encourage financial education only or complement it by other interventions to influence long term behaviours. One area is retirement: should public authorities educate people about why it is important to save for retirement or should they push them to save for it? One obvious issue with influencing (or “nudging”) is whether the public authorities really know what is best for people, and how they can take people’s diversity into account. Another issue is that nudging can disempower while education aims at empowering people. Saying that, the speaker gave interesting examples of “nudges”: he has worked with low income groups in India and they teach the envelope method to control expenses and save. In one study, they asked one group to stick a photo of their children on the “savings” envelope. People were less likely to open and use the savings envelope if their children’s photo was on it. Another example is the power of automation: we tend to save more if we have an automatic monthly transfer from our current to our savings account. All speakers recognise that financial education is the most important way people can really learn to take control of their financial lives- but honest (or self imposed) nudges can help us.

The conference ended with how Canada ig going to implement financial education in their schools and how other countries could draw national strategies from the Canadian example. 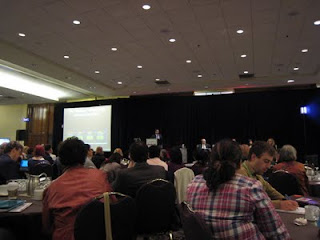