During the Global Money Week organized by CYF that took place in Kinshasa from March 28 to April 3, APPEC-EDUCATION (the Association for the Promotion of Education in Entrepreneurship in Congo) with a + b = 3’s support, and in partnership with APROCEC (the Professional Association of Credit Cooperatives and Savings of DRC) presented the exhibition “Finance in pictures” at the headquarters of APROCEC for three weeks. This exhibition was originally created for a + b = 3’s 10th anniversary and shown in Hong Kong and Phnom Penh last November.

In total the Global Money Week reached 9,470 people including nearly 780 for the exhibition only (75% of school students and 25% of adults- teachers, NGO members and financial institutions staff). In addition to the twenty or so posters and the comments which go with them, students (and adults) could fill out a questionnaire on the various issues raised by the exhibition.

Jean-Michel Ngoyi of APPEC comments: What we thought would be little has emerged as something big that proved very timely especially in the world of finance; at first, the participation was passive but gradually as we advanced more and more people have found that the images spoke and they began to reflect, especially as during the exhibition, the scandal of the Panama papers broke out. a + b = 3’s new slogan ( “money counts, people matter”) also deeply touched several visitors. This exhibition aims to educate about finance and at the same time denounces unethical practices like the poster about the pressure of interest: the poster with “compound mice” prompted a lot of comments by people who undergo pressure from banks and the issues about interest (posters on the impact of interest) have also been discussed at great length and even sparked a mini-conference. The use of Lingala, one of our national languages, has enabled to put financial education issues in the public arena. The poster about debt (“Do not let your debts crush you”) has attracted many people and sparked debate among visitors and borrowers. Indeed, one of the points that emerges from the reactions to this exhibition, which is a very innovative project for our country, is that financial education should not only target people who use or will use various financial services but it should first of all target the bankers themselves .  The exhibition ended on April 19, 2016 with the visit of a delegation of GIZ (German cooperation agency).

a + b = 3 finds these reactions particularly important because these ten years working in financial education have convinced us that our role as educators is not only to convey information, but we must also encourage critical thinking, particularly on the issues of responsibility and ethics that are fundamental to develop and operate financial systems based on fairness and mutual trust, which is the first requirement for sustainable economic exchange. Financial education cannot be reduced to bank marketing, and pushing the poor towards banking products will not reduce poverty.

Jean-Michel continues: our partners appreciated the exhibition very much and the first results are already positive: we have proposed some posters of the exhibition (the ones about debt) to be incorporated in the textbooks we are currently working on (Note: financial education has been declared a priority by the Government of DR Congo). Our partners hope that this exhibition can take place every year at the same period with other posters and new topics and the current exhibition can be mobile and be exposed in other cities of Congo. This exhibition has driven lots of people, an audience and also a great responsibility because since then we have received more training requests. There is a huge need in particular to train NGO staff, professors and teachers but also financial players themselves and we count on the support of a + b = 3 to organize a training of trainers.

Some testimonials: André Nkusu  (APROCEC ): “This exhibition is a novelty even for us in the world of finance, it is the first time that we work in such an activity and it is a resource that we have not often used. It is easily adaptable to all ages and we are especially glad with its mobility. This exhibition can be shown in the premises of financial institutions, or in schools and even at the market. People, especially our members, can easily understand things with the pictures. We thank you for this first event in our country, DR Congo, and hope that a + b = 3 builds up on this experience because our country is vast …”

Billie Bilema (bank agent): “We made an exciting visit with various themes that raised discussions and questions but as we walk further into the tour, things are becoming clearer. The central themes are often those of classical financial education and our customer agents can also use them to discuss about credit issues, interest rates, debt, expense, and even financial negotiation … “.

Kabedi Abigael (15 year old student): “Through this visit, for the first time, we discovered finance in a different way, though pictures; for us it is interesting, fun and it empowers us especially towards ourselves, and financial institutions …. We hope that this exhibition will move to our schools during major events so that more of our colleagues and our teachers benefit from it… We leave the exhibition with the idea that banks are partners, that debt should be avoided unless it’s really useful and that we must give priority to saving and investing rather than spending. If you organize it soon we will be happy to bring many of our friends …”

Note: you can watch the exhibition. 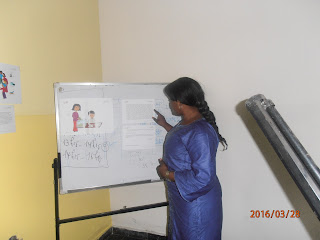 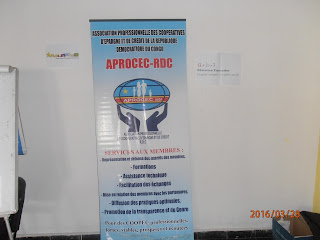 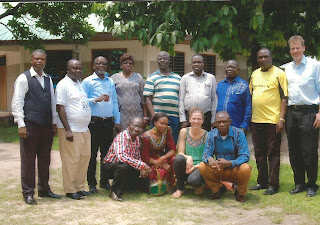